Feast Of Our Lady Of Lourdes

Today is the Feast of Our Lady of Lourdes - marking the day when Our Lady first appeared to Bernadette Soubirous.

On Thursday 11 February 1858, a 14-year-old Bernadette Soubirous was out gathering firewood with her sister and a friend at the grotto of Massabielle outside Lourdes, when she reportedly had the first of 18 visions of what she termed "a small young lady" standing in a niche in the rock. Her sister and her friend stated that they had seen nothing.

On realising that she alone, and not her companions, had seen the apparition, Soubirous asked her sister Toinette not to tell anyone what had happened. Toinette, however, was unable to keep silent, and told their mother, Louise Soubirous. Because their mother had suspected the children were lying, both girls received a beating, and Soubirous was forbidden to return to the grotto again. A few days passed and Soubirous asked for permission to go again with her siblings and the permission was granted. 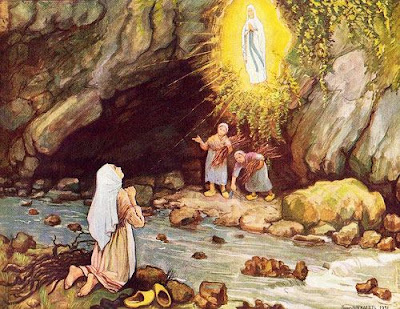